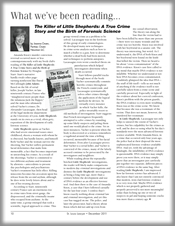 The Killer of Little Shepherds:
A True Crime Story and the Birth of Forensic Science

Amanda Knox’s murder conviction reversal occurred more or less contemporaneously with my book club’s reading of The Killer of Little Shepherds: A True Crime Story and the Birth of Forensic Science by Douglas Starr. Starr’s narrative hardly rivals other page turning nonfiction like David  McCullough’s John Adams. Based on the life of serial killer, Joseph Vacher, in late nineteenth century France who “slaughtered more people than  the infamous Jack the Ripper,”  and the man who ultimately solved Vacher’s crimes, Dr. Alexandre Lacassagne, then head of the legal medicine department  at the University of Lyon, Little Shepherds stands on its own as a vivid, often gory, exposition of the development of early forensic science.... 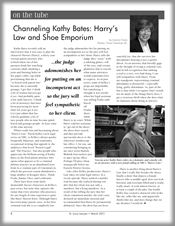 Kathy Bates recently told an interviewer that it was easy to play the character Harriet (Harry), a thirty year veteran patent attorney who is fired when one of her partners finds her watching cartoons while smoking a joint and burning holes in her paper coffee cup while proclaiming that she is “so bored with patent law” because she is naturally grumpy. I get that. I think a lot of women lawyers get it too. And probably quite a few male lawyers. I think a lot of attorneys that have been practicing for more than ten years get it too. Let’s just admit that law schools graduate a lot of nice people who in time become jaded, bored and grumpy people. At least some of the time anyway... 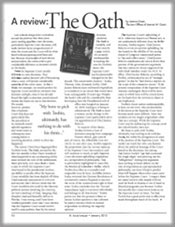 A review: The Oath

Law schools design their curriculum around the premise that three years spent reading appellate court decisions, particularly Supreme Court decisions, will make lawyers better prognosticators of what the courts and the Court will do when faced with interpreting novel facts and law. Because of principles of stare decisis and precedent, the courts tend to give considerable deference to decisions already on the books. Even the Supreme Court usually defers to its own decisions. That deference makes lawyers' job of forecasting what a court will decide considerably easier in all but a few cases. In Roe v. Wade, for example, we would predict the Supreme Court would not overturn that decision outright, since it has already found the right to abortion constitutional within the limits set out in that decision...